To schedule a free consultation and fire protection review, contact us  to find a location near you or call 860 793-6900 and a  customer  representative will be happy to assist you.​

Our 24-hour emergency service is offered to all our customers. We take your fire protection very seriously and will respond to your emergency call immediately 365 days a year - around the clock.

“Your service is always been professional. But your speedy response on a holiday weekend was just amazing.”

“It was a pleasure doing business with Allstate Fire. They were very professional, efficient, courteous and on time. I would highly recommend them.”

Effective fire protection for automotive spray paint booths, prep stations and paint mix rooms is essential to the overall risk management plan of any automotive repair facility. They require special fixed automatic fire suppression systems, which, due to the expanding variety and increasing complexity of automotive spray booth technologies, must be a customized installation designed to suit any given booth design and the field conditions at the automotive shop.​

Fortunately, in addition to years of experience and hundreds of these special type installations under our belt, Allstate Fire Equipment is an authorized distributor and installer for no less than three major manufacturers (the major three, in fact) who specialize in these applications. Thus, we are able to offer options and find the best “fit” system for your unique application.​ 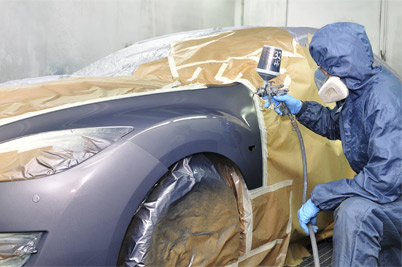 Static electricity has been confirmed as a cause of refueling fires, but cellular phones have not.​

Three percent of vehicle fires at service stations between 2004 and 2008 were coded as having unclassified static discharge as the heat source (this coding excludes electrical arcs or sparks). According to a report by the Australian Transport Safety Bureau (ATSB), “between 1993 and 2004, there were 243 reports of fires breaking out at petrol stations due to mobile phones. However, according to Dr. Adam Burgess of the University of Kent, not one of these incidents occurred as a result of a sparking mobile phone. In fact, there is no evidence that any petrol station fire has been ignited from electrical equipment”. The Petroleum Equipment Institute echoes these findings via its “Stop Static.” campaign. According to its website “So far, we have been unable to document any incidents that were sparked by a cellular telephone, In fact, many researchers have tried to ignite fuel vapors with a cell phone and failed.”​

Fires ignited by static occur during container refilling as well as vehicle refilling.​

According to the same ATSB report, there is evidence that the condition most likely to lead to a spark discharge is filling an unearthed metal container or tank with fuel. An example of this condition is filling a metal container on a plastic-lined bed of a pick-up truck. In fact, of the twenty first-hand reports of fires involving the filling of portable fuel containers received by PEI between 1990 and 1995, seventeen involved the container being placed in the bed of a pick-up truck.​